Zedekiah Mkagwa spent his time on earth in two sections. His life before he met Christ and his life after that day that he met the King of Kings and Lord of Lords.  For him, it was very simple. He used to say, “Nimeamua! I have decided (to follow Jesus, no turning back.)” The day he accepted Jesus as Lord of his life, all his addictions stopped and never started again. He belonged to Jesus and never looked back. For his brother, James, however, it was not so cut and dry. He heard the gospel said the prayer, went to church, formed relationships, but found it almost impossible to give up the bottle. He would go in cycles of repenting, being active in fellowship for about two or three weeks and his old life would come back and he would return to his addictions more and more. Fast forward 20 years of this cycle, he had a dream one night that he died in his sin and went to hell. The dream all but scared the hell out of him. He came to his brother’s house the next morning shaking with fear that he was going to die of alcohol and lose his soul. Zedi gently re-assured him that Jesus had forgiven him. He got on his knees and once again accepted the finished work of Christ on the cross. I was there and witnessed the beauty of his surrender to the Lord. Later that night, we met together as the church leadership team and made a plan to walk with our brother James as he followed through with his renewed relationship. We organized that ourselves that one of us would spend an evening with him every evening until he got through those critical weeks and months of saying yes to Jesus and no to his old habits. The plan worked for about two weeks before things began to go awry.

It started one evening when one of us went to his house and found him not there. We searched for him and found him in the bar. We called him out and he agreed to come home. The rest of the evening went as usual. The next evening, it happened again, so on the third evening, we showed up at his work place and walked him home. The next evening, we showed up at his work place only to be told that he had left work early that day. We found him in the bar and that time, he said we should just leave him alone. He had made his choice. We told him we would honor his decision, but continue to pray for him.

A year later, he was in a bar, and at age 55 years, he got into a brawl with a man half his age. During the fight, the younger guy punched him in his gut (now filled with beer) and it ruptured his bladder. Zedekiah got a call that James had been rushed to the hospital. He went and saw James in his bed awaiting emergency surgery. He told Zedi that he was afraid that the dream was coming to pass and that he was dying in his sin. Zedi re-assured him that God had no intention of James dying in his sin and that his dream was merely to invite him into the saving and delivering power of Jesus. James was shocked that God would love him so much. He readily gave his life to Jesus. The surgery was successful and from that day in 1993 to today, he has had no addiction to alcohol. Every time I see him, he tells me how thankful he is for the love of Jesus shown in his great patience and love.

I was curious to know how both he and James got into drinking in the first place. He said they learned it from their dad. It was also the reason both Zedekiah and James were not educated beyond the third grade. Their dad was such a drunk that the boys had to leave school after third grade to work. Life was really hard and they both vowed that they would lever drink like dad does. When they were in their late teens and early twenties, dad got them good jobs at a boys boarding school in a different part of Kenya. Both boys moved to Machakos and lived there for many years.

It wasn’t until a few years ago that I found out that Zedekiah and James were both dedicated to the Lord in the very first Pentecostal church in Kenya. Zedi was born in 1939. That formed another question regarding Zedi and James dad. To me there was a missing piece in their story I needed to understand. If there father was an alcoholic, he wouldn’t have been in a Pentecostal church. How was it that they were dedicated in that church? The answer is a sad reminder of the effects of choices we make in times of pain. It has been said that the most important decisions we make are the ones made in response or reaction to injustices done to us. Zedi and James father was not an alcoholic when Zedi was born. He was a worship leader in the church. What happened? Well, the story goes that there was corruption in the leadership of the church and dad got burnt by his leadership. He chose to leave the church and get bitter at the church. In his pain, he turned to other sources of comfort and developed a drinking habit. Yet, in spite of that sad choice, God redeemed for Himself both of his sons and through Zedekiah has brought hope, healing, salvation and joy to untold thousands near and far. My life has been radically affected by Zedi’s life and testimony. How many others have been changed by one man’s choice to follow the Lord. It doesn’t matter as much what has been done to you as to how you choose to respond or react to that thing that has been done to you. 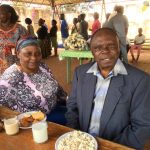