I have been silent for a long season of rediscovering true north in my walk with the Lord. Today, the silence ends. Today marks the day of great loss and at the same time, great gain. This day, at about 10am, East African Time, our dear dear friend, mentor, companion and brother reached home. Zedekiah Mkagwa shed his physical body that had borne the scars of a life made hard by sin and yet, at the same time, he lived such a life of victory and grace that changed so many lives toward the King, including mine. I count it such an awesome privilege to have known him here and for eternity. We used to joke that I would love it if my place in heaven was right next to his fabulous mansion. Today, he is being given the walk (fly) around tour of his new and true home. I miss him, but will join him later.

When God told Molly and me, through a prophet (June 1983), that “hunger was crying out to Him “Who will come, Who will come?” and that Molly and I would answer the call and cry of the African national” I had no idea what He was talking about. We went to Kenya the year after that (Feb., 1984) and served in the city of Mombasa. Three years later, we were led to connect with the leadership of the denomination we were serving in the central part of Kenya. We moved to Nairobi, took Swahili instruction and awaited our next assignment. We learned many things in the seven months we stayed in Nairobi. 1. We learned that timing is important. 2. God is not in a hurry. 3. God can speak in board rooms as well as prayer closets. At first, we were shocked that our assignment came from a discussion in a committee and resisted the thought, saying we would pray about it. Then, one morning, we got a knock on our door. A woman introduced herself as Mary in a Southern USA drawl. She said she and her husband were planting a church in Nairobi and were living down the street. As she was walking past our gate, the Holy Spirit told her to come and knock at our gate. She was the messenger of the Lord. She said that she and her husband were holding Saturday evening prayer meetings in their home for the new church members. She invited us to join in. We said yes. Well, for the next four Saturday evenings, we were the only folks that showed up and so we got to spend 12 to 16 hours (in total) in intercession and worship with this wonderful veteran missionary couple. These people could get into the place of prayer. During those times, we shared about our mixed feelings about being assigned to a strange place as a result of a decision in a board meeting, not from a place of prayer… We doubted that God could lead us in that way. We were wrong and the couple gently listened and counseled us to give it five years. If, after that time, we could see no fruit of the assignment, we could ask the Lord where to next.

Well, within weeks of our arrival in Machakos, we began to take notice of one of the elders in the church. He seemed to carry the presence of God in a unique way. The other thing we began to observe in him was his fear of God and resulting lack of the fear of man. Several times, the church elders board would send him to confront someone living contrary to the Word of God. They chose him, because he was the only one who could not be bribed or intimidated by comparative wealth and standing in the community. Needless to say, we loved Zedekiah and his wife, Mary from early on.

About three months later, we invited Zedi and Mary over for dinner. This was going to be interesting, because, neither Zedi nor Mary spoke much (if any) English. We, likewise spoke little Swahili at that point. Yet, we were so drawn to them as a couple. So, during our dinner time, while doing our best at hit and miss communication, Zedekiah made a bold statement. He said, “Jon, You are the answer to my prayers.” I understood what he said, I did not understand at all what he meant by that statement. It was not uncommon to hear similar statements out of people hoping to receive a handout. My heart dropped. I thought the worst and I answered, “Oh, that is nice.” He responded by saying, “Oh, you don’t understand. I prayed and God has answered my prayer. You are here.” To which I responded, “Wow. That is really nice.” still not knowing where he was going with this. To which he said, “You don’t understand. Me and my friend spent two hours a day praying for a missionary to come to our town and after one year of prayer, God showed me a picture of your face and now you are here.” To that, my mind began to race and I was brought back to the prophetic word that was spoken over Molly and me about hunger crying to the throne of God and we answering that call. So, I asked him if he could trace back to when he saw my face in the vision. He traced it back to June of 1983, the same month as the prophecy. We were on to something supernatural and knew it when, the next day, at the District board meeting Zedekia’s name was chosen to be set in as the next pastor of the church. Thus started a sweet five years of growing connection. I was so drawn to him in spirit that he was my incentive to master Swahili so I could go deep with Zedekia.

Over that next five years, we became family to Zedi and Mary and their three sons (Musa, Daniel and Samuel) and to his prayer partner Joshua, (wife Janet and five children) who also saw my face in a vision in June 1983. The church blossomed under his simple yet integrates leadership from about 35 members who had succeeded in starving the former pastor out of the pulpit. But, who couldn’t love Zedi. He was the real deal. He loved God and loved people from that relationship. He preached a simple straight gospel right out of the gospels and mentored many young men into ministry. When the Lord moved us on to another assignment in 1992, the church had grown in depth and number to over 100 people.

Zedi’s commitment to the Lord was uncompromising and real. His testimony spoke of the power of God to deliver and save completely. He came to Machakos at the age of 20, having grown up in a home with a father who was given over to alcohol. By the time he reached Machakos, he and his brother (2 years his senior) were both veteran drunks. They both worked labor jobs at a local high school for boys, because they both had only gotten as far as third grade due to poverty and dysfunction. Zedi found a wife and she loved the Lord and prayed for his salvation. One day, two young men appeared at their door and upon being invited in preached the gospel to Zedi. He accepted Jesus as Lord into his life and everything changed that day. His addictions were broken instantly and he began to go to church and grow in knowledge. He taught himself to read by reading the Bible. Because of his illiterate background, he began to commit large portions of scripture to memory and by the time we met him, he preached many times without needing to read the scripture. He also had a powerful prayer life with the Lord. When God wanted to speak something specific to him, Zedi would many times feel a tap on his shoulder. He knew it was time to get quiet and hear the Lord speak.

Zedi loved to preach on the street. His favorite spot to do this was at a particular place that had a small mound of dirt. He would get on the mound and preach with or without microphone. That particular place was special to him, because one night, prior to his conversion, he had gotten extra drunk to the point that he got sick on the way staggering home in the middle of the night. He reached this mound and passed out. He vomited as he lay there, slept in his vomit and in the morning, Mary found him lying there in his mess with thousands of flies covering his face and helped him home. so, that place held great significance to him, because he could proclaim the saving power and testify that if God can raise up a drunk like him, there is nobody He cannot save and deliver from the power of addiction and waywardness. He was also painfully aware that some people don’t get delivered from addiction that quickly. His brother, James, tried to come to Jesus but couldn’t find the freedom from drunkenness for another 20 years. But, he did. I’ll tell that story another time. 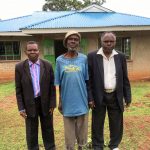