Encouragers Unlimited is a Christian Non-Profit organization. Our vision is to bring the life of God’s Kingdom to the vulnerable and to encourage Kingdom connection in and through the Body of Christ.

Job 14:9 says, “…yet at the scent of water it will bud and put forth shoots like a plant.”

We believe that one simple word or act of encouragement in the Name of Christ is like the scent of water, bringing strength and new life to everyone it touches.  Encouragers Unlimited Ministries started as a ministry to young pastors and other Christian workers in the United States, Europe and Africa. Dad and Mom Stern were dearly loved and known as Papa and Mama to nearly all who knew them. Then came Kings Kids Village, a children’s home born in mom’s heart in her youth and now pouring out God’s love to the vulnerable of Kenya.

Their legacy continues to bring life and connection through Kings Kids Village, Sudan Reach and Encourages Unlimited – Europe. These ministries continue to pour the love of Jesus to the vulnerable of Africa and encourage Christian connection in Africa, Europe, Israel and around the world.

1 Thessalonians 3:2 says, “and we sent Timothy to visit you. He is our brother and God’s co-worker in proclaiming the Good News of Christ. We sent him to strengthen you, to encourage you in your faith,”.

Our founders, Paul and Eleanor Stern, encouraged people in ministry for over 60 years, lifting up the hands of Christian workers in need of encouragement. In 1988 Encouragers Unlimited was born. Their connections led away from pastoral leadership and on the road. Later (in the 1990’s) they ventured over to Europe and Africa as (inspired by the Holy Spirit) they just seemed to show up when needed the most. Then in 2002, they moved to Nairobi, to oversee the establishment of Kings Kids Village for the next four years. After that,  they retired back home in America to Lincoln, Nebraska. 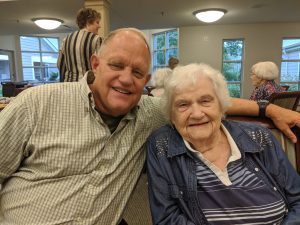 Paul went home to be with the Lord in 2013. Eleanor, now in her 90’s, stays close to home. She has settled into the independent living section of a retirement community near to her grandkids (Solo and Sarah Mwania) and their “Tribe of Many” great grand children. She continues to pray for and uplift the legacy of encouragement as she shares the Gospel with her community where she resides. She continues to live out the truth of a book she wrote about how she and Paul came out of retirement to establish Kings Kids Village. It’s called

“Never too old”… Available on Amazon.

Encouragers Unlimited Ministries is now being overseen by Jon and Molly Stern. In 2002, they helped Paul and Eleanor establish a keystone of Encouragers legacy, Kings Kids Village, located in Nairobi, Kenya. Jon and Molly later assumed the mantle of directing Kings Kids Village in 2006 and of Encouragers Unlimited Ministries in 2011. After some time, they also accepted an invitation to join a pastoral team at Nairobi Lighthouse Church where they served from 2012 to 2018. Fruitful as it was, with time, the challenge of juggling three ministry duties and family became more difficult. In early 2018,  Jon and Molly then began the process of resigning from the pastoral team,  transitioning Kings Kids Village over to a younger generation of leadership and grooming Tray and Lydia to eventually lead KKV.

In April, 2019, Jon and Molly stepped aside from directing Kings Kids Village for a yet unknown duration of time. They are presently living in the US on sabbatical where they are resting and enjoying a season connecting to their Stateside family. They are also working admin for Encouragers Unlimited, seeking to strengthen the support base for Kings Kids Village and other Encouragers projects, as well as strengthening their own support team. They currently live in Redding, California. Tray and Lydia have graciously assumed all roles and responsibilities at the helm of Kings Kids Village.

Tray and Lydia have been with us in the vision of Kings Kids Village since before they married in 2011. Their journey onto our leadership team has been one of patience as their hearts have longed to be at our side in ministry. Tray officially joined staff in January, 2018 to begin the process of transitioning into leadership on the KKV Team. Since April of 2019, they have been set in as Directors of Kings Kids Village for the duration of Jon and Molly’s time away (see the above article).

Please pray for them in this new endeavor with its added weight of responsibility.

Our efforts in Kenya mainly consist within our family centered home for orphans and vulnerable children in Nairobi, Kenya. At Kings Kids Village we currently serve over 45 children who are in various stages of their journey to adulthood and fulfilling their God given purpose.

Since 2010, our hearts have been moved with compassion for the people of South Sudan. As we dream of establishing a presence within the nation, we are presently helping mentor and educate a few young South Sudanese men to serve God and their homeland in significant ways.

Ever since a joint church planting venture in the 1970’s, Jan and Meis Barendse have been a part of the Stern ministry family. They are now following in the footsteps of Paul and Eleanor (their spiritual parents) in bringing encouragement to pastors all over Europe and beyond.

Since establishing Encouragers Unlimited Europe, Jan and Meis Barendse have also extended the ministry of Encouragers  to Israel. In a land with so much religious, political and social turmoil, there is great need for their ministry of counsel and encouragement.

Our global efforts are made possible by your generous donations. We are blown away by the financial support that our partners continue to give in order to see the mission go further. But even more encouragement needs to be given around the world. Would you consider becoming an Encouragers Partner?

Give a one-time donation or setup a recurring donation